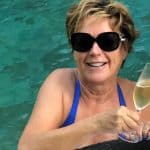 We boarded, efficiently at Brooklyn Terminal in New York, the queue moving steadily towards the luxurious lobby of Cunard’s flagship liner, the transatlantic doyen, Queen Mary 2, patiently tied up, loading her supplies and 2100 passengers with their luggage.

This was our first cruise on a large liner, we had only two previous commercial cruises, on small Ponant yachts, that accommodated only 130 cabins. We were more used to private yacht charters for 10-12 people or our own boat. We had booked with trepidation, 3 Cunard cruises, back to back.

As we stepped aboard, we joined a line of guests moving past a welcoming committee of beautifully tailored and immaculately uniformed officers and the Captain. Smiling, shaking hands or gesturing us to embark, and myriad staff adopting each guest to escort them to their cabin.

As we followed our escort to our eagerly awaited balcony Britannia suite cabin, it was evident that this cruise liner was well-loved and cared for with the most excellent attention to detail. The carpet in the gangways had been meticulously swept against the pile to create a new, plush, “you’re the first to step on it” feeling.

When our cases arrived, we were amazed at how we were able to empty the contents into the ample wardrobe and drawers with space and coat-hangers to spare. Bonus! Our cabin steward or “house mouse” who was to look after us the entire seven days, pointed out the intelligent bed design, that was high enough to allow luggage storage underneath.

Time to hit the decks exploring. The source of that band music on the back deck, turned out to be the party venue for the “Sail Away” party, with dancing, drinking and observing the host port, New York become enveloped in a massive history-making thunderstorm, triggering Government phone alerts. As we steamed away from real-life dramas, we entered the serene biosphere of a seven-day transatlantic crossing.

A few beers, a deck spa and a chat with other excited sailors later, it was time to dress up for our first dinner in the Britannia Grill Restaurant, at our chosen time slot for the week of “late” adults, a sitting reserved for us at 830pm each night.

Here we encountered our “first night – oh dear” moments. On arrival at the grand entrance, our Maitre d’ – Atilla clucked his tongue, observing my husband’s lack of tie, and his jacket slung over his arm. “Oh no!” he remonstrated, a jacket must be worn, at least to the table, and “Would Sir like to borrow a tie, as he had clearly forgotten his?”

Dress code addressed we followed the agile Atilla up an endless series of stairs, up to the bleachers, and across the already packed restaurant to a table for twelve – where he beckoned to two seats opposite each other, straddled in the middle of 10 other strangers. On one side of a chair was a mute teenage boy, frowning at us and the other side of the table sat an elderly gent – probably in his 80’s.

This was to be our table seating for the entire seven day cruise, Atilla triumphantly announced.

Little did he know what force of resistance he had come up against. No. No No!

I have not paid this sort of money to spend a romantic seven days with my husband after the most stressful 18 months, sitting here. We expected a beautiful table for two, where we could unwind, catch up and reconnect.

A wave of a $20 note produced an intimate ringside table overlooking the lower level of the theatrical restaurant. We dined every evening, with tie and jacket at our intimate table for two, and a smile from Atilla.

Walking is the new black on a large liner. Always one to buck authority,  and being from Australia, where our water drains anti- clockwise – so, I walked anti-clockwise much to the disgust of 99% of the human sheep. But I got to see them all face on, and it was sport to me to observe who was happy, angry, frustrated trying to overtake dawdlers. Detours up stairs and gangways revealed many surprises.

On day one, with the sun shining and the sea wind whistling in my ears, I climbed eight flights of stairs to the top deck and discovered the posh Queen Mary kennels. Eleven dogs were being stylishly transported to London , with QM2 rain coats for inclement weather, visits from family in the lounge area or in the outdoor exercise area, complete with a US red fire hydrant to pee on, before settling into luxury cages for the evening.

At the very front of the ship on the deck sat 4 huge, smooth, dark grey sculptures, like a hump-back whale outline. I marvelled at the artistic display for days, until I stopped and read the small plaque, declaring they were in fact spare propellers, in case of emergency. I could not imagine how they would have entertained replacing them at sea, but spare they were, in case.

Opposite the spares, was a huge brass bell proclaiming 2003 as the QM2 launch date, that was evidently regularly polished, and was fortunately protected in a Perspex cabinet, because my rebellious streak would have seen me ringing it each time as I walked anti-clockwise on the deck.

The corridor forward of the ship, on both sides was dedicated to table games. Cards, Scrabble, Monopoly, Mah-jong and jigsaw puzzles. Seated at deep picture windows just above (mostly) the waterline they provided hours of entertainment as the sea and occasional mammal passed by.

The theatre offered such diverse entertainment each night, with a show at 830pm for early diners and 1030 for late sittings. Plush red tub chairs stage-side with drinks service, and 2 levels of audience all faultlessly silent and respectful of the acts, witnessed seven shows, ranging from top comedians, to Cirque style circuses, musical theatre and magicians. Departing the theatre, the crowd pushed you through the casino, where many were lost, into the overspilling bars and lounge areas that served guests till the wee hours.

All too soon we passed Land’s End in Cornwall, where a phenomenal coincidence had me passing by my father’s last residence, on the exact 30th anniversary of his last living birthday on this earth.

The we disembarked and headed 500M to board Queen Elizabeth to cruise for 14 days to the Arctic Circle and Norway.